OK, a little more about Education

As I mentioned, in December 2010, after 7 years of work, I had just defended my dissertation and was awarded my doctorate. My dissertation was being published into a book (can be found on Amazon.com, just search for Aaron Dishno). Thinking back to the late 1980’s, when I left Riverside City College (now Riverside Community College), I loved education. I didn’t want to leave school. But the way I remember it, I tried to get into a four year school and was denied student loans. Maybe it was the way I filled out the paper work. I was living with my parents and they considered their income and decided somehow that we as a family had enough money to pay for school directly. I guess they didn’t consider I also had four sisters. Regardless, I did not get approved on my student loans so I had to stop going to school. I had completed over the maximum number of units they would transfer, completed classes in calculus, physics, chemistry, English, history, and general education. I think I was a foreign language away from an Associates degree, yet I found that for a four year degree in engineering didn’t require it, so I didn’t do it. I never planned to stop there.

After a short time I applied and got into a tech school, Control Data Institute. Years later in hind-sight, I realized that I received student loans because I was no longer living at my parent’s home or claiming my parents on the loan application. I probably could have gotten a loan for a four year school! Regardless, this was a turning point for me. I was going to school for aerospace engineering. I wanted to design planes, rockets, and space vehicles. It was a passion of mine growing up. But if you think back to that time, all of the large aerospace industries were laying off thousands of people including my dad. People with master degrees and doctorates in aerospace were out of work. So I turned to my second passion, which was computers. The tech school was a good starting point where I had a certificate of completion that put a stake in the ground that computers were no longer a hobby, but a career choice.

By 1990, I was married and my first child, Alicia, was born. My second daughter, Becca, was born in 1994 and a son, Mick, in 1996. They are one the greatest joys in my life. Yet by 1997 I was divorced and saw my kids every weekend. After a couple years of hard grief, the kind only another non-custodial parent would understand, I found myself working hard burying myself into my work during the week when I wasn’t with my kids. That habit never left me. I couldn’t be busy enough to forget the pain. So I worked long hours and eventually signed up for night courses at Cal Baptist. I completed a Bachelor Degree in Information Systems Management on a Saturday in June and started a Master Degree program in Education the following Monday. I finally got back to school and felt that great feeling of accomplishment. I was not going to leave again until I felt done.

Two years later, I completed the Masters Degree in Education with an emphasis in technology. I was now a specialist in teaching computers. My theory was, I knew computers and my resume proved it, so I needed a degree that complemented it. Having a degree in education put me in a rare category of programmers. I met so many teachers that knew what they wanted for programs but lacked the technical know-how to create it and so many programmers that didn’t know enough about education to create what they need. I filed that gap. Even with that degree, I did not feel done. I immediately started a dissertation proposal that combined my expertise in computers with education, studying how people were matched to be place in student housing. Within a year, I found the perfect fit, La Sierra University, and started my doctorate. They believed in me and guided me to where I am now with the quality of writing and so many insights into a morally-sound leadership role.

I had reached the height of my formal education with my doctorate complete, at last, I felt that chapter of my life was complete.

By now, I was working as a programmer analyst III and Webmaster for the County of San Bernardino. I was so used to working full time and going to school that it left a huge gap when I no longer had school. I had to fill that gap with something worthy, something that could keep giving me that feeling of accomplishment day after day, something new.

It was now in January of 2011. Completion of my doctorate made me feel like I could accomplish anything. My work with the County and with some of the best computer professionals in the world had pushed my skills in computers, networking, web farms, web traffic, redundancy, backup, safety, security, system designs, and programming to a whole new level. My brain was always on. I rarely slept more than a couple hours at a time. I would wake up with my brain racing with ideas and thoughts. Actually to this day, this never stopped.

Something new had evolved in computers; HTML 5 and especially the Canvas object. Up until now, most browser companies like Google Chrome, Microsoft Internet Explorer, FireFox, Safari, etc…, seemed to have their own agenda trying to move in different directions. It was amazing enough to be able to program a website that worked on all browser platforms beyond the very basics of HTML. For you non-technical readers, HTML is hyper-text markup language for programming websites. It is the most basic part for creating a webpage and adding text, pictures, sounds, and videos. So many potential technologies were on the table but lacked the full buy-in from others. For example, many liked Adobe Flash for animation, yet Apple decided their devices will not run it. We had possibilities with SilverLight, Java Applets, Active X, and others. But not one would work on all computers much less the growing number of smart cell phones and tablets, until HTML version 5. It was becoming a standard and one of its greatest features in my opinion was the Canvas.

The Canvas is a way that I could put a square on a webpage and create any drawing, import pictures, and even animate and manipulate how it looks on the fly. This meant I could create full featured animations! Web based games started to excel with great quality of graphics. I spent days watching demos, trying samples, and discovering what it can do. The best part, you didn’t have to download a plugin or change settings in your browser to make it work. It just worked in all major browsers!

One night in particular, it became so clear. When you click on a link on a web page, the browser went to the new site page, retrieved the content, then showed you the new page. I could do the same thing with graphics and 3D Buildings with animation!

It would be like a whole new internet above and beyond the traditional web we are used to. 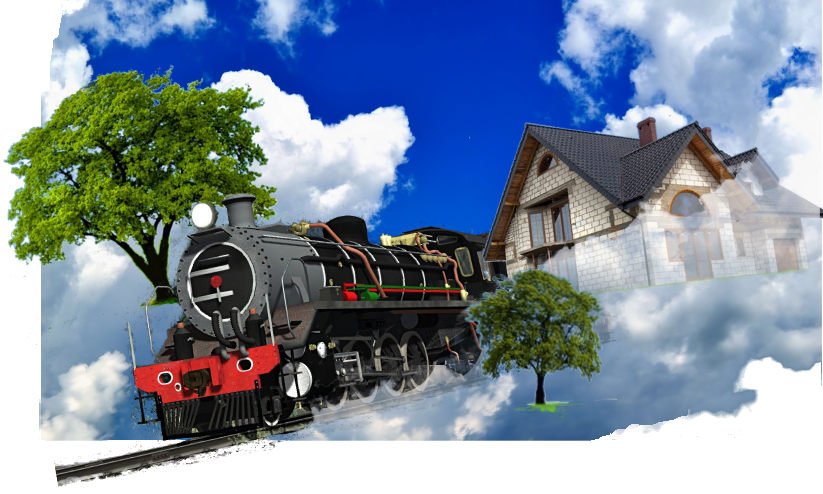 All of these thoughts came crashing to my mind… I saw:

and so much more has rushed through my head since then.

Imagine how much of the internet you have never seen because you cannot think of the right word to search. Now you would walk around in cities and find new experiences. It would be mapped out, 3D versions of the Internet.

3D Buildings are websites, we connect them through 3D Communities, and Pan and Walk between the 3D Buildings. The 3D Buildings can be real buildings, fictitious places, defy gravity, amusement rides, 3D Games, 3D Online Schools, 3D Stores, museums, history, and so much more.

When I woke up in the morning, I told my wife, Karen, about my dream. Her reply, with enthusiasm, was that it sounded like something I started all of those years ago with the bulletin board system. She was right. Technology was finally ready.

So I started coding immediately…